Kevin’s début as a performer was as a chorus member in the Roy Hart Speakers/Singers landmark version of The Bacchae, premiered at the World University Theatre Festival in Nancy in 1969 and subsequently revived in London later that year. He performed in many of the Roy Hart Theatre’s most significant works over the following twenty years, including such roles as Ariel in Shakespeare’s The Tempest (a role he shared with Kaya Anderson) and Stubb in the company’s adaptation of Moby Dick. Collaborations with other companies included recording the role of Puck for a puppet version of Midsummer Night’s Dream and Aegisthus for the Roy Hart Theatre/Talking Band Co-Production of Furies based on Aeschylus’s Agamemnon. He has also performed Envol with the French dancer Dominique Dupuy.. In 1993 he performed Brian in Michael Christofer’s Shadow Box in Dublin. More recently he has partnered up with Caroline Boersma to create and perform Montee in the United States, France and Italy.

As a director, his first experience was in co-directing Seethings with Linda Wise-Pardo for Roy Hart Theatre in 1979. In 1991 he directed Merlin for the Amadée company, and subsequently directed Euripides The Bacchae and Seneca’s Oedipus for the Samuel Beckett Centre in Dublin, as well as Wolf’s Bride for Kuopio City Theatre in Finland. In the United States he directed a series of short plays by Sam Shepard for Henricks College and Ben Jonson’s Bartholomew Fair for Muhlenberg College.

Musical collaborations include Racines Dans L’Air with Livia Koppman and Haim Isaacs and Mezzaluna with Georgette de Sonnaville. He has been a consultant for a range of theatre companies, storytellers and dance artists: MACNAS, street theatre from Galway, Daghdha Dance company, Limerick, A La Lueur des Contes in France.

Information on collaboration: please email me at info@kevincrawfordvoice.com or use the contact form. 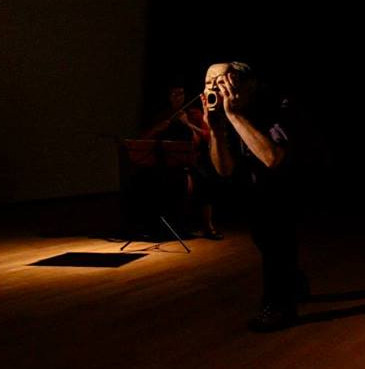